Wondering if there are any adventure movies for kids on Netflix? Check out this post to find out every title that’s available right now. 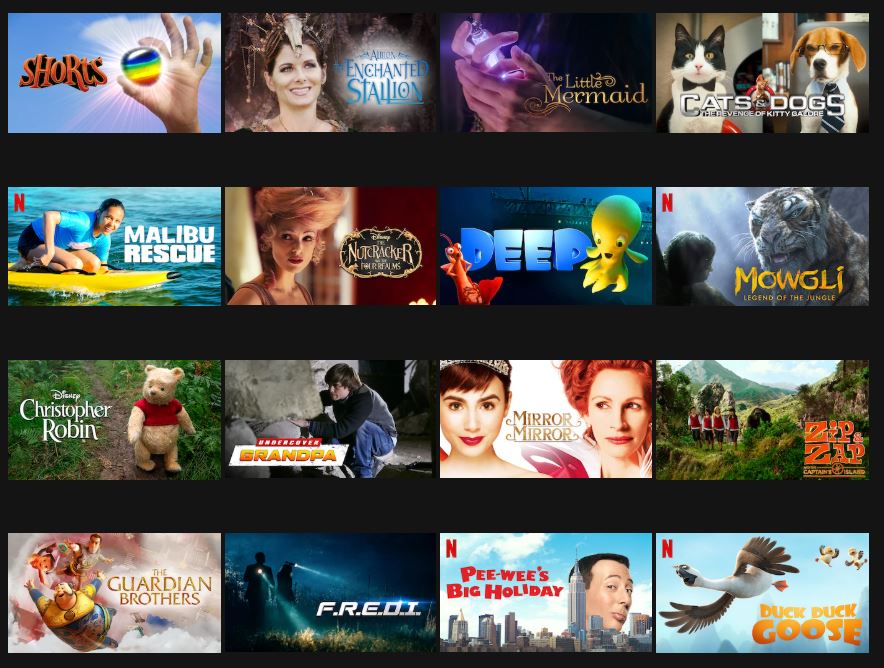 Adventure Movies for Kids on Netflix

In a world ravaged by the Fire nation’s aggression toward the peaceful Air, Water and Earth nations, a  young boy holds the key to restoring peace. | Stream on Netflix

The wall that separates worlds tumbles to the ground. Life on Earth just became a little more fantastic. | Stream on Netflix

Take control of an adventure set in the Minecraft universe. The future of the world is at stake, and your decisions shape the story. | Stream on Netflix

The Adventures of Puss & Boots

In an effort to save Puss’s old mentor, El Guante Blanco, Puss and Dulcinea embark on an adventure to find the Fountain of Youth. | Stream on Netflix

In this Disney animated tale, the orphaned Tarzan (Tony Goldwyn) grows up in the remote African wilderness, raised by the gentle gorilla Kala (Glenn Close). When a British expedition enters the jungle, Tarzan encounters the beautiful Jane (Minnie Driver) and recognizes that, like her, he’s human. Falling in love with Jane, Tarzan is torn between embracing civilization and staying with his gorilla family, which becomes threatened by the ruthless hunter Clayton (Brian Blessed). | Stream on Netflix

Video game bad guy Ralph and fellow misfit Vanellope von Schweetz must risk it all by traveling to the World Wide Web in search of a replacement part to save Vanellope’s video game, “Sugar Rush.” In way over their heads, Ralph and Vanellope rely on the citizens of the internet — the netizens — to help navigate their way, including an entrepreneur named Yesss, who is the head algorithm and the heart and soul of trend-making site BuzzzTube. | Stream on Netflix

Telecommunications guru Winston Deavor enlists Elastigirl to fight crime and make the public fall in love with superheroes once again. That leaves Mr. Incredible with one of his greatest challenges ever — staying home and taking care of three rambunctious children. As Violet, Dash and Jack-Jack offer him a new set of headaches, a cybercriminal named Screenslaver launches his dastardly plan — hypnotizing the world through computer screens. | Stream on Netflix

The days of canine superstar Bolt (John Travolta) are filled with danger and intrigue … until the cameras stop rolling. But Bolt doesn’t know that he’s on a TV show; he thinks his amazing powers are real. When Bolt is accidentally shipped from his Hollywood soundstage to the mean streets of New York, he begins his most-amazing adventure: Armed only with his delusions and accompanied by a cat and a hamster, he sets out to to find his owner, Penny (Miley Cyrus). | Stream on Netflix

Predating his adventures as an adult vine-swinger, this animated feature has awkward teenager Tarzan (Harrison Chad) searching for an identity when he realizes that he’s out of place among the apes that have raised him. He ventures out into the jungle and imitates a series of other animals to see if they might be better role models. This approach does not succeed. It’s only when he meets a reclusive ape (George Carlin) that his journey toward self-discovery nears its destination. | Stream on Netflix

Gabi and Spence, and the Spooky Dog, are the “Ghost Patrol“, Their Towns supernatural pest control, but they have never seen a real ghost. When they get a call to investigate the old Geist Manor, they are about to find the proof they are looking for – and a whole lot more. | Stream on Netflix

The Secret Life Of Pets 2

Max the terrier encounters canine-intolerant cows, hostile foxes and a scary turkey when he visits the countryside. Luckily for Max, he soon catches a break when he meets Rooster, a gruff farm dog who tries to cure the lovable pooch of his neuroses. | Stream on Netflix

When Loki and a frost giant plot to conquer the world, a team of heroes assembles to stop Loki from stealing Santa’s power. | Stream on Netflix

Legend knows him as an archer of unwavering focus, this hero of the Mahabharata fought a battle in his own heart then took up arms against his enemy. From boyhood innocence into a world of betrayal, he becomes the most powerful warrior of his time. | Stream on Netflix

Historian and code-breaker Ben Gates (Nicolas Cage) has been searching his whole life for a rumored treasure dating back to the creation of the United States. Joining an expedition led by fellow treasure hunter Ian Howe (Sean Bean), Gates finds an ice-locked Colonial ship in the Arctic Circle that contains a clue linking the treasure to the Declaration of Independence. But when Howe betrays him, Gates has to race to get to the document ahead of his so-called colleague. | Stream on Netflix

When Civil War veteran John Carter (Taylor Kitsch) mysteriously awakes on the surface of Mars — also called Barsoom — he little expects the adventure that awaits him. Carter reluctantly becomes embroiled in an epic conflict among the red planet’s inhabitants, including Tars Tarkas (Willem Dafoe) and Princess Dejah Thoris (Lynn Collins). As Barsoom is poised on the brink of collapse, war-weary Carter rediscovers his humanity when he realizes that everyone’s fate is in his hands. | Stream on Netflix

The adventure doesn’t stop here! Check these out, too: