These cheer Movies will definitely get you in the spirit. While you’re at it, why not have a cheerleading movies marathon?

I was a junior cheerleader when I was in elementary school. I cheered for the Northwest Raiders. I remember my little white turtleneck, black and red uniform, and my white canvas cheer sneakers (which were super hard to keep clean!).

What is cheer? Cheerleading is an activity wherein the participants cheer for their team as a form of encouragement. It can range from chanting slogans to intense physical activity. (Source)

Whether you have a daughter who is already a cheerleader or one who is interested in the sport, you’re going to love this list of cheer movies.

Here are 10 cheer movies you can watch. (I’ve indicated the rating so that you can choose age-appropriate titles, depending on your kids’ ages and your discretion.)

Ford High’s star football players scheme to ditch football camp so they can spend the summer surrounded by beautiful girls… at cheer camp. Hilarious antics ensue as the jocks use their new “sensitive side” to talk the hotties into skinny dipping, cheering naked and hooking up.

The Toro cheerleading squad has spirit, spunk, sass and a killer routine that’s sure to land them the national championship trophy for the sixth year in a row. But for newly-elected team captain, Torrance (Kirsten Dunst), the Toro’s road to cheer glory stumbles when she discovers their perfectly choreographed routines were stolen from a hot hip-hop squad across town. Now the squad must scramble to find a new routine to compete in this year’s competition.

When small-town high school hottie Jennifer is possessed by a hungry demon, guys who never stood a chance with her take on new luster in the light of Jennifer’s insatiable appetite. From the Oscar-winning screenwriter of Juno. 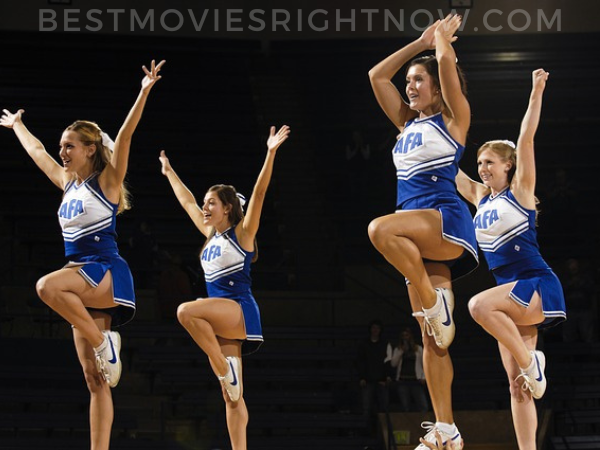 Not Another Teen Movie

Super-jock Jake Wyler makes a bet with his buddies that he can turn the school frump into a prom queen. But by the time they get to the dance, this over-the-top, outrageous comedy hysterically pays tribute to all of the classic teen movies and moments in film history.

A transfer student to a rough high school tries joining the cheerleading squad and she not only faces off against the head cheerleader but against her former school in preparation for a cheer-off competition.

Man of the House

A older man and a cheerleader magically change bodies.

In high school, a group of popular cheerleaders plot revenge on their triple-timing boyfriend to discover that dating is the hardest subject of them all.

Bring it On: Fight to the Finish

When her mother falls for a wealthy man, a cheerleader must move in with her new stepfather and transfer from a run-down public high school to an exclusive prep school, where she struggles to fit in with her affluent new peers.

After the snooty cheerleading captain blocks her from varsity, she recruits her best friends from her old school to help her whip the pathetic junior varsity cheerleading squad into fighting shape.

If you liked this list of cheer movies, you’re going to love these Cheerleading Movies on Netflix, too.

Contact Us
As an Amazon Associate I earn from qualifying purchases.
34 shares