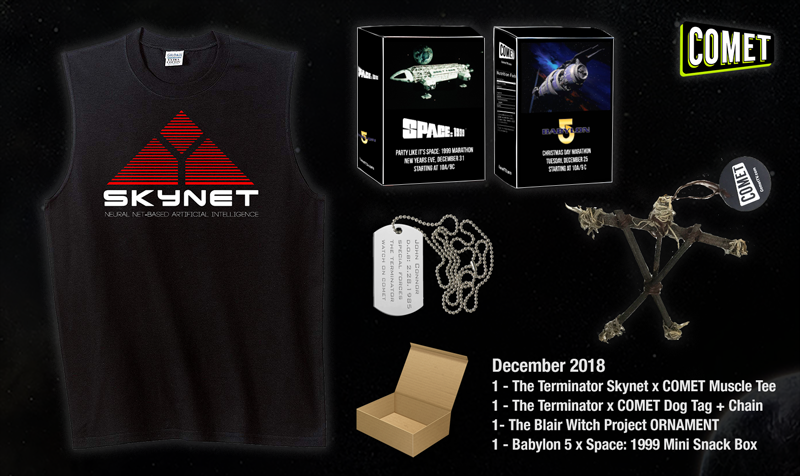 Snow is falling, the scent of pine needles is in the air, so it must be… Time to watch some awesome movies and TV shows on COMET TV and CHARGE!

Yep, this December the sci-fi and horror classic The Terminator is blasting its way through Comet TV! Check out the classic and the birth of Cyberdyne Systems!

If that wasn’t enough to celebrate the holiday season Babylon 5 has a Christmas marathon! After you sip your egg nog and trim the tree, turn on COMET TV for a spacey Christmas Marathon! Starting at 10a/9 C!

And don’t forget to check out Area 10! The best in cult classic films are airing all month long on Comet TV!

Airing on COMET in December

YOU DON’T NEED A SUBSCRIPTION TO WATCH THESE GREAT MOVIES…
THEY’RE AIRING FOR FREE ON COMET!

Babylon 5 (Christmas Marathon)
This Christmas, after you sip your egg nog and trim the tree, turn on COMET TV for a spacey Christmas Marathon! Starting at 10a/9 C you can catch up on this classic sci-fi series!

The Blair Witch Project (1999)
There’s something sinister lurking in Black Hills Forest and missing girl’s disappearance is linked to the legend of The Blair Witch! A group heads into the woods to find out what happened and the footage found after will send a chill down your spine. Don’t turn your back because you don’t know what’s lurking behind you….

The original classic that started the franchise is airing on Comet TV! Catch Arnold Schwarzenegger and Linda Hamilton in their classic roles trying to defeat Skynet from launching total human extinction. Relive the first time you heard, “Come with me if you want to live.”

Area 10
The best in cult classic films are airing all month long on Comet TV! If you’re in the mood for laughs check out Haunted Honeymoon, if you fancy a trip book your ticket to Futureworld, join Ah-Nuld for The Terminator and who doesn’t have those Jeepers Creepers!

The Adventures of Buckaroo Banzai (1984)
It’s a battle to the death! Buckaroo Banzai gets caught in the middle of two alien forces from Planet 10. But Buckaroo Banzai has the Overthruster which will bring the bad aliens back to their home planet, which the good aliens can’t allow to happen. Earth’s survival hangs in the balance!

Airing on CHARGE! in December

Hurtin’ For A Burtin’
From Dusk Till Dawn TRILOGY

HOW TO WIN A COMET TV AND CHARGE! DECEMBER PACK

The Comet TV and CHARGE! December Prize Pack has:

1 – Limited Edition Terminator Muscle Shirt – Show off those guns! Figuratively and literally in this awesome Terminator Tee! Do some flexing and share your pics on the gram! #CometTV

1 – Exclusive Blair Witch Holiday Ornament – Deck the halls and ring in the new year with the Blair Witch! This hand-crafted ornament will bring holiday scares to you and those you love!

1 – Terminator Dog Tag – John Connor is the leader of the resistance and this promo dog tag set will get you ready to battle the cyborgs of the future!

1 – Babylon 5 and Space:1999 Custom Snack Box – This is the perfect treat to celebrate any trip to space. It might require some popping, but this custom box will satisfy any spacey craving!

Use #CometTV to spread to the word on social!
a Rafflecopter giveaway

This promotion is open until January 4, 2019, at 11:59 pm EST and is limited to US residents, 18 years or older.  The winner will be chosen randomly. Winner must respond to email within 24 hours or prize may be forfeited.  Promotional content and prize for this promotion is provided by and shipped by the sponsor and/or its representatives.  The prize may be sent via FedEx or UPS. No P.O. Boxes.

Jeepers Creepers is my favorite.

The Terminator is my favorite one.

I’m most excited about The Blair Witch Project