Check out the full list of what’s new to Netflix in October 2018. Includes movies, TV shows, series, and Netflix originals. 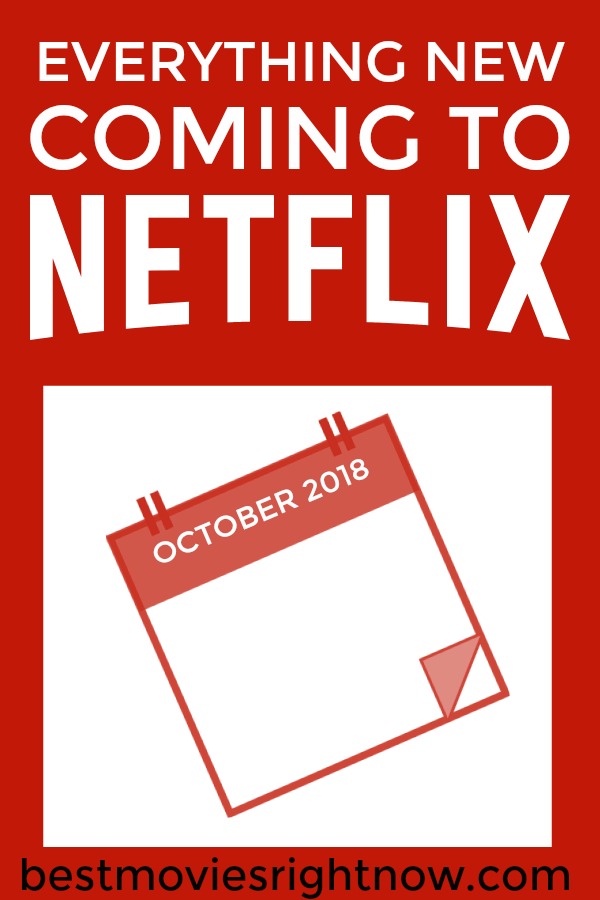 Did you miss the list of new on Netflix September 2018?

Make sure you finish up any series or movies scheduled to leave at the end of September before they’re gone. Here’s a sneak peek at some of the hottest series and films on Netflix in October.

New on Netflix in October 2018

Oct. 4
Creeped Out (Netflix Original) It sounds like Netflix’s version of “Are You Afraid of the Dark?”: A kids anthology series filled with horror stories.
The Haunting of Molly Hartley
Violet Evergarden: Special: Extra Episode

Oct. 8
Disney’s Sofia the First: Season 4
Mo Amer: The Vagabond (Netflix Original) Arab-American comedian Mo Amer riffs about being a refugee and sitting next to Eric Trump on a flight in this stand-up special.

Oct. 10
22 July (Netflix Film) Paul Greengrass (“United 93,” “Captain Phillips”) directs this drama about the aftermath of a mass shooting that took place on July 22, 2011 at a leadership camp for teens in Norway.
Pacto de Sangue (Netflix Original) This series – “Pact of Blood” – follows a TV reporter who uses questionable methods to report on gang wars and police corruption in the Amazon port of Belem, Brazil.

Oct. 12
Apostle (Netflix Film) Dan Stevens plays a man in search of his sister, who was kidnapped by a murderous religious cult, in this thriller from Gareth Evans (“The Raid”).
Errementari: The Blacksmith and the Devil (Netflix Film)
A Spanish horror fantasy featuring a blacksmith, the devil and a young girl.
Feminists: What Were They Thinking? (Netflix Original) This documentary explores the feminist awakening via 1970s photos.
FightWorld (Netflix Original) Actor and martial artist Frank Grillo (“Captain America: Winter Soldier,” “Kingdom”) hosts a travel docuseries about international traditions of fighting.
ReMastered: Who Shot the Sheriff (Netflix Original) A documentary about the 1976 assassination attempt on reggae icon Bob Marley.
Tarzan and Jane: Season 2 (Netflix Original) The animated series with a teenage Tarzan and city Jane continues in the Brazilian rainforest.
The Boss Baby: Back in Business: Season 2 (Netflix Original) The Boss Baby (made famous in the Alec Baldwin movie) deals with a new threat to baby popularity: old people.
The Curious Creations of Christine McConnell (Netflix Original) Instagram star and baker/artist Christine McConnell shares her macabre food and decor creations in a new series.
The Haunting of Hill House (Netflix Original) Inspired by the novel, this seriously scary-looking horror series follows a fractured family, in the present and past, and the terrifying home they share.
The Kindergarten Teacher (Netflix Film) Maggie Gyllenhaal plays a devoted teacher who takes nurturing a student’s genius to an extreme level in this film, which premiered at Sundance Film Festival.

Oct. 15
Octonauts: Season 4
The Seven Deadly Sins: Revival of The Commandments (Netflix Original) An anime series about a princess and evil warriors.

Oct. 16
Ron White: If You Quit Listening, I’ll Shut Up (Netflix Original) A stand-up special from Ron “Tater Salad” White, who rose to fame on the “Blue Collar Comedy Tour.”

Oct. 19
Accidentally in Love (Netflix Original) A Chinese drama about a popular male singer who goes back to school and meets a seemingly-ordinary girl.
Ask the Doctor (Netflix Original) A team of doctors share advice and debunk medical myths in this docuseries.
Best.Worst.Weekend.Ever.: Limited Series (Netflix Original) A comedy series about teenagers getting into ridiculous hijinks in their last weekend before high school.
Derren Brown: Sacrifice (Netflix Original) British illusionist Derren Brown conducts a social experiment: Would an ordinary person take a bullet for a stranger?
Distrito salvaje (Netflix Original) A Colombian series starring Juan Pablo Raba (“Narcos”) as a former guerrilla soldier trying to reintegrate in society.
Gnome Alone (Netflix Film) A girl moves into a new home with living garden gnomes that protect her house.
Haunted (Netflix Original) Tales of horror, told by the people who witnessed them, are re-enacted in this series.
Hip-Hop Evolution: Season 2 (Netflix Original) The Peabody-award-winning docuseries traces the growth of hip-hop subcultures in the ’80s and ’90s.
Illang: The Wolf Brigade (Netflix Film) Set in 2029 South Korea, police take on a terrorist group in this action thriller.
Larva Island (Netflix Original) In this animated Korean series, two Minion-like larvae are stranded on a tropical island, where they’ll inevitably find slapstick fun.
Making a Murderer: Part 2 (Netflix Original) After Season 1 earned widespread attention, the series continues to follow Steven Avery and Brendan Dassey as they seek exoneration.
Marvel’s Daredevil: Season 3 (Netflix Original) After a great first season and a messy second, the superhero (Charlie Cox) is back, along with villain Wilson Fisk.
The Night Comes For Us (Netflix Film) An Indonesian action movie about an assassin who spares a girl’s life and becomes the target of gangsters.
Wanderlust (Netflix Original) Toni Collette stars as a therapist who decides, along with her husband, to start seeing other people in order to keep their marital spark alive.

Oct. 21
Robozuna (Netflix Original) An animated British kids’ show about an orphan and a robot on a quest for freedom.

Oct. 23
Adam Sandler 100% Fresh (Netflix Original) Sandler brings his silly brand of stand-up on the road, with songs and musings that will likely range from bathroom humor to honoring Chris Farley.

Oct. 26
Been So Long (Netflix Film) A romantic musical set in London about a single mother who meets a handsome stranger.
Castlevania: Season 2 (Netflix Original) The animated series inspired by the video game continues, as vampires try to wipe out humanity.
Chilling Adventures of Sabrina (Netflix Original) “Mad Men” alum Kiernan Shipka takes on the role of the teenager who must choose between the witch world and her loved ones, based on the Archie comics.
Dovlatov (Netflix Film) This biopic captures six days in the life of influential Russian dissident writer Sergei Dovlatov.
Great News: Season 2
Jefe (Netflix Film) The story of a boss whom everyone hates.
Shirkers (Netflix Original) A documentary about a bunch of teens who shot an indie in Singapore 25 years ago with an elusive American director, who swiped all the footage.
Terrorism Close Calls (Netflix Original) The investigative series takes a look at terror plots that were thwarted in the nick of time.

Oct. 27
Girl from Nowhere (Netflix Original) A series from Thailand about a mysterious girl called Nanno.

Fate/EXTRA Last Encore: Illustrias Geocentric Theory (Netflix Original) An anime adaptation of a video game about Hakuno, a man with no recollection of his past.
The Degenerates (Netflix Original) A series featuring raunchy stand-up sets from rising comics.

And here’s everything leaving Netflix in October.

Leaving Oct. 26
Southside with You

WHAT ARE YOU LOOKING FORWARD TO WATCHING ON NETFLIX IN OCTOBER 2018?