Whether it’s Talk Like a Pirate Day or any time of year, these Pirate Movies on Disney Plus are sure to please. It’s only a small subset of the Disney Plus Kids’ Shows available. 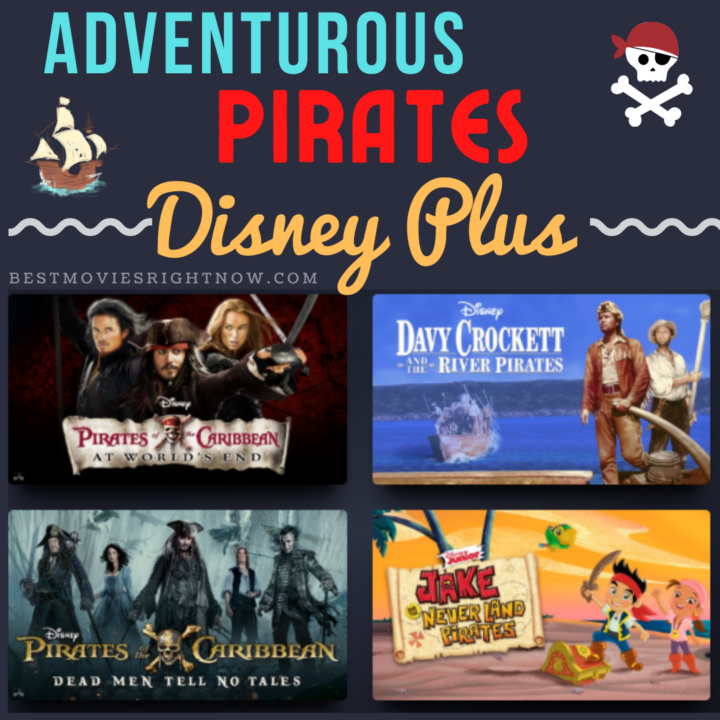 In English-speaking popular culture, the modern pirate stereotype owes its attributes mostly to the imagined tradition of the 18th century Caribbean pirate sailing off the Spanish Main and to such celebrated 20th century depictions as Captain Hook and his crew in the theatrical and film versions of Peter Pan, Robert Newton’s portrayal of Long John Silver in the 1950 film of Treasure Island, and various adaptations of the Eastern pirate, Sinbad the Sailor.

In these and countless other books, movies, and legends, pirates are portrayed as “swashbucklers” and “plunderers.”

They are shown on ships, often wearing eyepatches or peg legs, having a parrot perched on their shoulder, and saying phrases like “Arr, matey” and “Avast, me hearty.”

Pirates have retained their image through pirate-themed tourist attractions, traditional film and toy portrayals of pirates, and the continued performance and reading of books and plays featuring pirates. (Source) 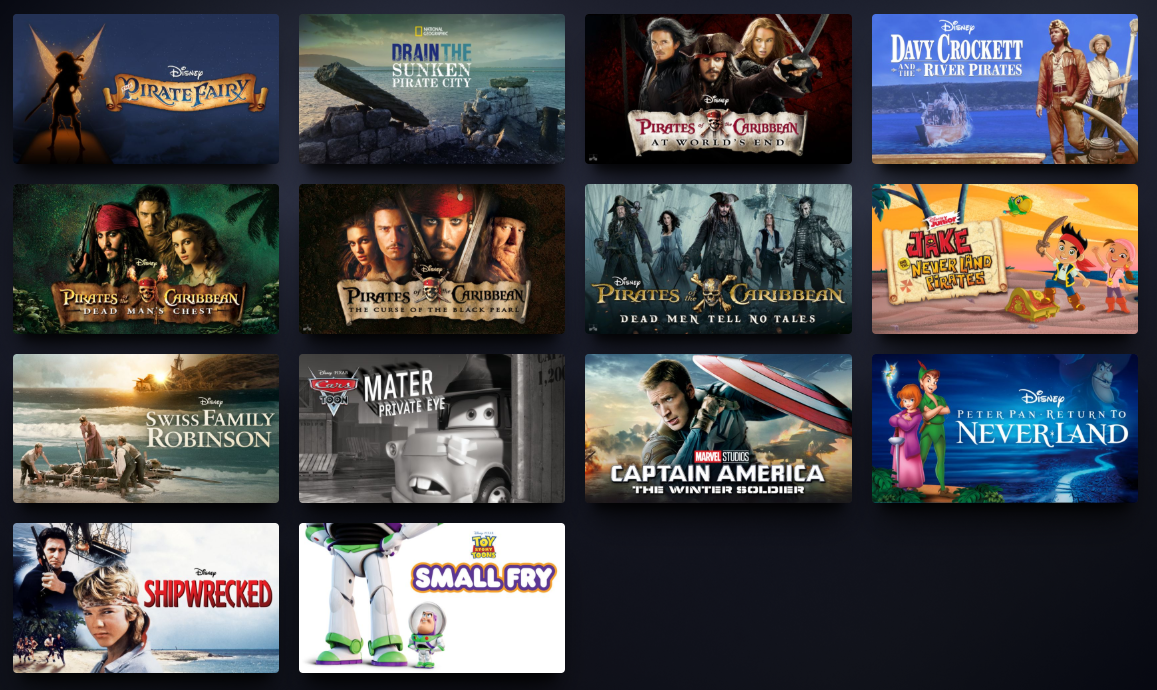 Pirate Movies on Disney Plus

Here are the Disney pirate movies list available on Disney+:

In this spritely tale, Tinker Bell and her friends set out to find free-spirited fairy Zarina after she makes off with some precious Blue Pixie Dust. (Watch on Disney Plus)

Jake and the Never Land Pirates

Jake, Izzy, Cubby and their parrot Skully sail from Pirate Island for treasure hunt adventures against Captain Hook. | Stream on Disney Plus

Davy Crockett and the River Pirates

Davy Crockett and the River Pirates. 1956. It’s a rip-roaring adventure for Davy Crockett—”King of the Wild Frontier”—and his trusty companion George as they head downriver to New Orleans to sell fur pelts. | Stream on Disney Plus 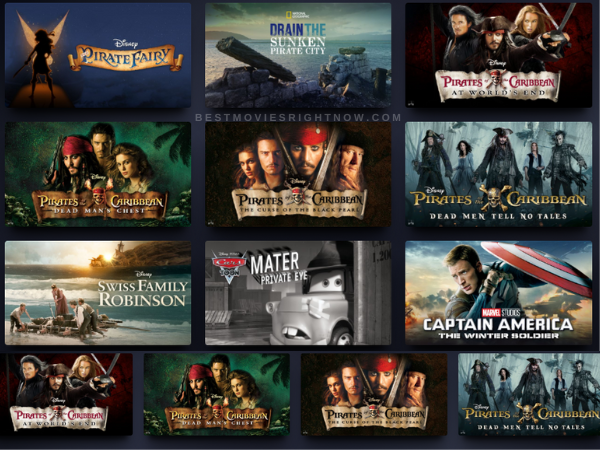 Hidden beneath Jamaica’s Kingston Harbour lie the ruins of the biggest pirate city of all time. | Stream on Disney Plus

The heroic tale of the courageous exploits of the Robinson family after they are shipwrecked on a deserted island. Using teamwork and ingenuity, they overcome the obstacles of nature and transform their new home into a “civilized” community. | Stream on Disney Plus

Join Tinker Bell, Peter Pan, and the Lost Boys, and meet Jane, Wendy’s ever-so practical daughter, who’s outgrown her mother’s tales of pirates and pixies until Captain Hook whisks her away to Never Land. | Stream on Disney Plus

A cabin boy discovers that some of his shipmates are actually pirates. (One of the first old Disney pirate movies!) | Stream on Disney Plus

These Disney movies with pirates are great for the kiddos to watch while stuck inside!

Pirates of the Caribbean movies list on Disney Plus

Pirates of the Caribbean is a Disney franchise encompassing numerous theme park attractions and a media franchise consisting of a series of films, and spin-off novels, as well as a number of related video games and other media publications.

Captain Jack Sparrow is the protagonist of the series, portrayed by Johnny Depp who appears in all five films. (Source)

Jack’s got a blood debt to pay: he owes his soul to the legendary Davy Jones, ghostly Ruler of the Ocean Depths. But ever-crafty Jack isn’t about to go down without a fight. | Stream on Disney Plus

Pirates of the Caribbean at World’s End

Captain Jack Sparrow, that wily charmer of a pirate, is trapped in Davy Jones’ Locker when his pirate brethren begin a desperate quest to locate and rescue him. | Stream on Disney Plus

Pirates of the Caribbean The Curse of the Black Pearl

When wily Captain Barbossa steals Jack Sparrow’s ship and kidnaps the governor’s beautiful daughter, Elizabeth, her childhood friend Will Turner joins forces with Jack to save her and recapture Jack’s ship, the Black Pearl. | Stream on Disney Plus

Pirates of the Caribbean Dead Men Tell No Tales

Captain Jack Sparrow is pursued by old rival Captain Salazar and a crew of deadly ghosts who have escaped from the Devil’s Triangle. They’re determined to kill every pirate at sea notably Jack. | Stream on Disney Plus

Pirates of the Caribbean on Stranger Tides

When Jack crosses paths with a woman from his past, he’s not sure if it’s love…or if she’s a ruthless con artist using him to find the fabled Fountain of Youth.  | Stream on Disney Plus

Looking for Pirate activities for your kids?

What would you add to this list of Pirate Movies on Disney Plus? 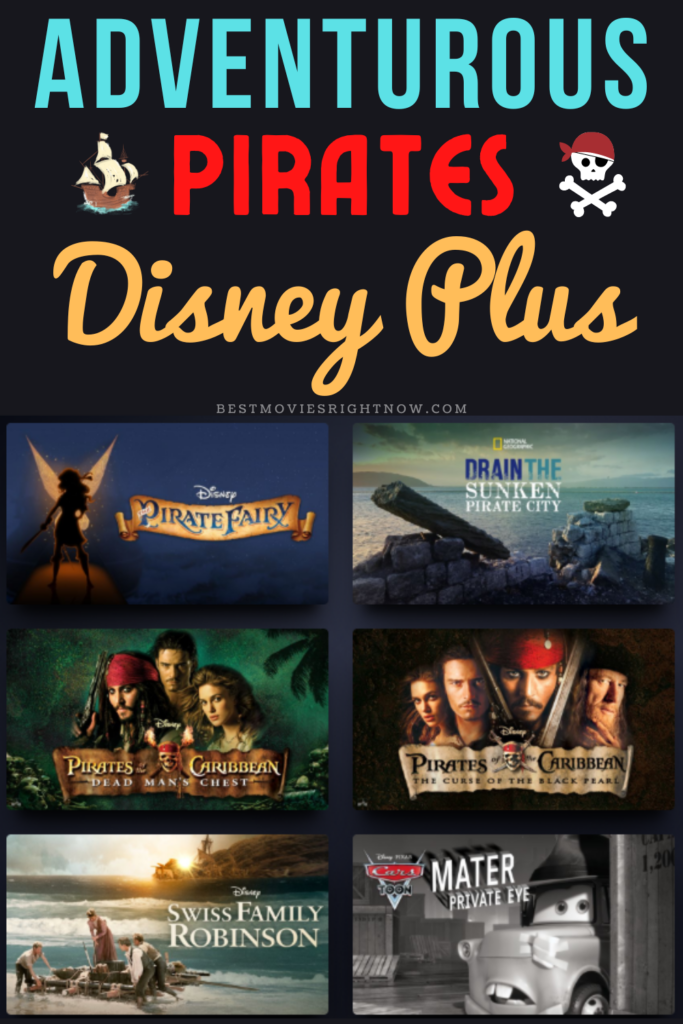