Looking for Kids Black History Movies on Netflix? There are some great titles you can stream on Netflix. These are only some of the many great Black history movies for kids.

February is Black History Month, and a wonderful way to share this rich culture and experience with our children is with these kid friendly black history movies on Netflix. 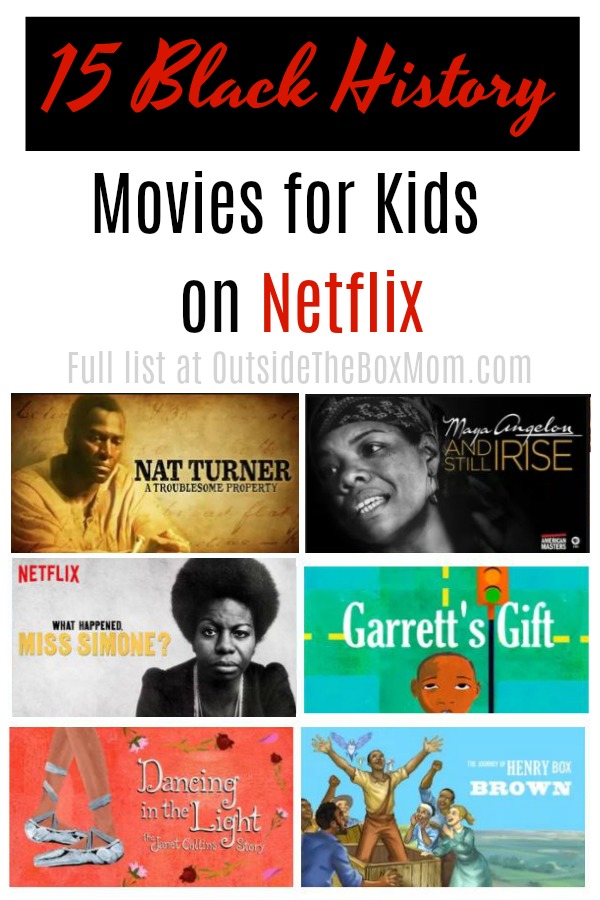 There are several other Black History Movies on Netflix, but not all of them are appropriate for children (including many about Black Power). That’s why I curated this list. These films and TV documentaries are a great resource any time of year.

Make the next family movie night an educational night with these 15 Kids’ Black History Movies on Netflix. It’s perfect for teachable moments and a great way to engage the kids with important topics. Here are just a few films that serve as conversation starters for the kids to discuss African American history.

Five teens (high schoolers) from Harlem become trapped in a nightmare when they’re falsely accused of a brutal attack in Central Park. (Watch on Netflix)

Maya Angelou: And Still I Rise

Poet and civil rights activist Maya Angelou is celebrated using her own words set over rare photographs and video illustrating her remarkable life. (Watch on Netflix)

A documentary explores the life and legend Nina Simone, an American singer, pianist, and civil rights activist labeled the “High Priestess of Soul.” (Watch on Netflix)

Ken Burns’s documentary depicts the action of famous Civil War battles, and relates the stories of soldiers, generals and a beleaguered president. … Beginning with an examination of slavery, this episode looks at the causes of the war and the burning questions of union and states. (Watch on Netflix)

A young Barack Obama forges his identity while dealing with race, divergent cultures and ordinary life as a New York City college student. Rated TV-MA (This program is specifically designed to be viewed by adults and therefore may be unsuitable for children under 17. ) – Please view before you watch with your children and/or watch with your children. (Watch on Netflix)

It’s been decades since Brown v. Board of Education (of the United States), yet American schools remain largely segregated. Some leaders are working to change that.

This documentary urged African Americans to enlist and join in the effort to be part of America’s continuing fight in World War II. (Watch on Netflix)

Director Steven Spielberg takes on the towering legacy of Abraham Lincoln, focusing on his stewardship of the Union during the Civil War years. (Watch on Netflix)

Oprah Winfrey sits down with Los Angeles-born director Ava DuVernay to discuss her Oscar-nominated film, historical cycles of oppression and the broken prison system. DuVernay won the directing award in the U.S. dramatic competition at the 2012 Sundance Film Festival for her second feature film Middle of Nowhere, becoming the first black woman to win the award. (Watch on Netflix)

This true story (originally aired as a TV show) of 19th-century Africa follows mighty Zulu Shaka as he leads his proud warriors on a quest to be one people, one power, one empire! (Watch on Netflix)

This series examines 1970s America, focusing on the major political and historical landmarks of the decade and the cultural response to those events. Episode 1 – Television Gets Real (Watch on Netflix)

The Story of Us

Explore the forces of love, belief, power, war, peace, rebellion and freedom in this series about the ties that bind — and destroy — humanity. (Stream on Netflix)

Which of these Black History Movies for Kids on Netflix is your favorite?

DO YOU HAVE ANY FAVORITE BLACK HISTORY MOVIES ON NETFLIX?

Contact Us
As an Amazon Associate I earn from qualifying purchases.
12shares